Nebraska students of all ages learn an “Hour of Code”

Posted on February 27, 2014 by Nebraska Children — Leave a comment 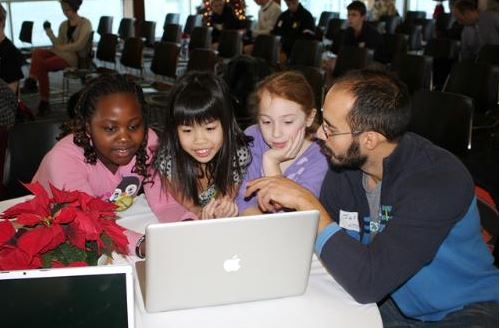 The skills needed to succeed in today’s workforce are very different than they were 20 years ago – or even 5 years ago. But the curriculum in schools have remained much the same. Computer skills, more specifically, are a requirement for almost all high-paying jobs. Many students graduate knowing how to use the internet, type a paper, or use other basic computer programs, but few know how the programs they are using were programmed or how to write  code.

An organization called Code.org is trying to change that.

Code.org reports that by 2020 there will be 1.4 million computing jobs with only 400,000 computer science students. That’s because only 10 percent of public schools offer computer science education. Of that 10 percent, very few of them allow the course credit to count toward math or science requirements.

These numbers are why Code.org is committed to bringing computer science into the classroom. Their goal is to make sure that all students have the opportunity to learn computer programming, and to increase participation by women and underrepresented students of color. The brains behind Code.org  believe that computer programming needs to be put into curriculum next to other STEM courses because it also teaches critical thinking, problem solving, logic, and language learning.

The Hour of Code

To help make their vision a reality, they put together an awareness project called Hour of Code. This initiative encouraged schools to put computer science programs into their curriculum and teach students how to do simple coding for an hour. Here in Nebraska, many participated in the event including:

In fact, UNL and LPS teamed up together and put on event that had such a great turnout that it ranked number 15 among all cities worldwide and they have high hopes to make it even bigger next year.

Code.org has high hopes that computer programming will be implemented into everyday curriculum for K-12 students. We’re thrilled to see Nebraska schools stepping up to put these critical tech skills into the hands of our future workforce.