Posted on October 24, 2018 by Nebraska Children — Leave a comment

This summer, Nebraska Children and Families Foundation commissioned a report on the effectiveness of Circle of Security – Parenting™ as it’s been implemented in communities across the state, and the results show that the program has been a resounding success so far.

Circle of Security – Parenting, or COS-P, is an 8-week parenting program that’s based on years of research about how to build strong attachment relationships between parent and child. It’s designed to help parents learn how to respond to their child’s needs in a way that enhances the attachment between parent and child. It helps parents give their children a feeling of security and confidence so they can explore, learn, grow, and build positive relationships – all essential skills for lifelong success.

The program was first implemented in Nebraska in 2011; currently, it’s being implemented statewide within agencies and by independent facilitators. Nebraska Children and Families Foundation participates in the program implementation via its Rooted in Relationships initiative, which is focused on strengthening social-emotional development among children from birth through age 8.

The report commissioned by Nebraska Children used data from a 9-question survey given to participants that asks them to assess their parenting stress, their parent-child relationship, and their parenting skills. Additionally, facilitators completed a survey describing session logistics and providing feedback on the sessions and their own reflective consultations. A total of 358 participants completed the evaluation surveys from 58 COS-P classes held across the state, and the results were very encouraging. 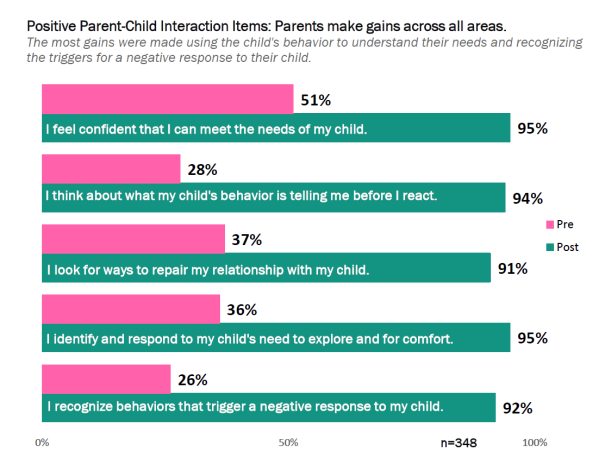 What did participants say about their experience?

A total of 354 of the 358 participants completed an additional satisfaction survey. Participants were very positive about their COS-P experience, using descriptors such as “very informative,” “well-designed program,” and “very helpful.” Many commented on the benefits of participating in the class, specifically how it helped them to gain parenting skills, improve their confidence, or enhance the relationship with their children. For many, it provided peer support, and they felt less isolated.

As one parent learned, “making an emotional connecting with my children is the key to great parenting.” Another parent pointed out, “I never looked at life this way or bringing myself down to my child’s level and now understanding what it is my child is trying to tell me by his actions.” Most importantly, they described how their relationships improved. “It wasn’t what I expected – it was so much more! Will help with every relationship.”

Not only was it beneficial to parents, one service provider commented, “I would recommend it to anyone who works with kids.” Several recommended the group to others, including new and adoptive parents. Overall, the participants rated the group format and their facilitator very positively (96%).

Program facilitators were also given opportunities to provide feedback. Of those who chose to do so, most agreed with the benefits described by participants. One predominant theme was “parents learning the value of looking at their history and its effect on their parenting.” Additionally, they saw parents growing in their ability to share and communicate with other parents in the sessions. Not only did participants gain understanding of the concepts discussed, many also changed their language and behaviors. One facilitator reported, “COS-P helped [a father] understand and manage his anger issues better than any anger management class he’s ever had. He’s sharing it with friends.”

Facilitators were also encouraged to participate in collaborative “reflective consultation” sessions with consultants, which most found very helpful. As one facilitator noted, “It helps to talk out the classes. Sometimes we hear some pretty heavy stuff. It just helps to have someone else to talk to that understands.”

The evaluation data from the surveys can be boiled down into a few key data points:

To learn more about how the results were collected and the history of Circle of Security™ – Parenting, you can download and read the full report from University of Nebraska Medical Center’s Munroe-Meyer Institute.