Posted on September 1, 2015 by Nebraska Children — Leave a comment 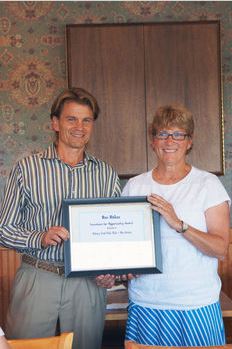 Jeff Cole of Nebraska Children and the Beyond School Bells collaboration were recently selected as the first recipient of the Ron Raikes Innovation for Opportunity Award. The award was given at a statewide ARKSARBEN recognition event at the Museum of Nebraska Art in Kearney on Sunday, August 16.

Beyond School Bells is a network of city-wide Expanded Learning Opportunity (ELO) programs across Nebraska. This collaboration is housed at Nebraska Children, and believes that learning doesn’t end when the school day does.

The ELO programs work together to provide engaging, high-quality learning experiences in the before-school, after-school and summer hours.

The mission of Beyond School Bells is to improve access to and quality of ELOs by building partnerships, working toward smarter state and local policy, increasing conversations and engaging educators and parents.

In an earlier post on poverty and the achievement gap, Jeff Cole says that schools aren’t the problem, but that’s where most reform efforts focus. “I would argue that these reforms fail because they ignore the proverbial elephant in the classroom – time spent outside of class.”

By focusing on the waking hours that students are outside the class, Beyond School Bells programs are able to provide more active, hands-on learning opportunities and more in-depth experiences than the school day can offer. The result is better classroom behaviors, improved academic achievement and more engaged students.

This award was created in honor of the late State Senator Ron Raikes who served in the Nebraska Unicameral from 1998-2008 and as chairman of the Education Committee for a number of years. Senator Raikes was known for legislation that featured innovative use of Nebraska resources for creating educational opportunities for young people from birth through college. The Raikes Family created the award in Senator Raikes’ honor to recognize individuals or organizations making a difference in closing the opportunity gap between disadvantaged and more advantaged children or youth in Nebraska.