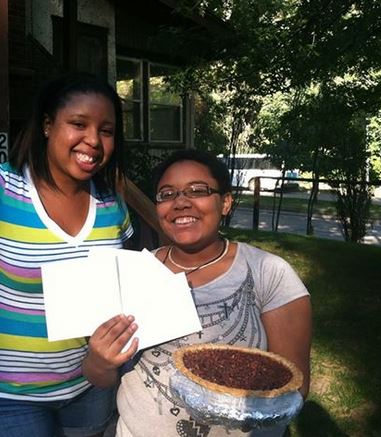 Schalisha giving a homemade pecan pie, baked by a volunteer, to a young woman on her birthday.

Schalisha Walker knows first-hand what it’s like to have your birthday pass unnoticed each year. She entered the foster care system at age 2, and was on her own again at 17.

“I know what it’s like to not feel special on your birthday,” said Schalisha, “and how it hurts to not have anyone to celebrate with.”

Some young people in foster care don’t always have someone there to surprise them for their birthdays. Many do, thanks to Nebraska’s wonderful foster families. But many do not, because of frequent relocations, disrupted placements and other logistical reasons. And for young people who age out of care and don’t have their own family, it’s even more likely that there won’t be a special treat on their special day.

Schalisha’s solution? The “No Youth Without a Birthday Treat” initiative. Started out of the Project Everlast Omaha office, where Schalisha is a youth advisor, the initiative started because Schalisha was hearing from young people that they had never (that’s right…never) had a birthday cake.

That’s unimaginable for most of us. And it was unacceptable to Schalisha. 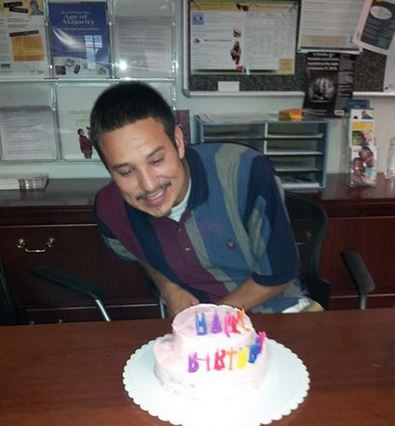 A young man getting a special birthday cake delivery at the Project Everlast Omaha office.

She took to Facebook and asked for volunteer bakers who would be willing to create special birthday treats for Project Everlast Omaha youth. The response was amazing.

“We’ve had so many willing volunteers,” said Schalisha, “It’s such a simple and impactful act, it brings tears to my eyes!”

Now, there’s a “No Youth Without a Birthday Treat” initiative in Lincoln, too. And plenty of Lincoln area bakers have stepped up, offering to provide cakes, pies, cupcakes and cake pops to young people in foster care on their birthdays.

No one is happier about the initiative’s expansion than Schalisha. “I want every youth that I work with to feel special on their birthday,” she said. “It is the one day a year that’s just for them and I want them all to have something to celebrate with.”

“The smiles on their faces when I give them a treat has warmed my heart so much,” said Schalisha, “I want all youth to have that joy on their special day!”

In Omaha and want to learn more? Check out the initiative’s Facebook page.

Nebraska Children and Families Foundation supports children, young adults and families at risk with the overall goal of giving our state's kids what they need to reach their full potential. We do this by building strong communities that support families so their children can grow up to be thriving, productive adults.

6 comments on “Making birthdays special for youth in foster care”